It’s been almost two years since I purchased my OLPC XO-1 computer as part of the Give 1 Get 1 program. For $400 US, I was able to donate one computer and keep one for myself.  Since then a number of significant events have happened:

Despite the third point, I still not only enjoy my OLPC, but I would argue that it remains the best netbook and e-book reader for me!  Now admittedly my needs and requirements may be specific, and certainly the software customizations I have done may be out of reach for the standard G1G1 recipient. 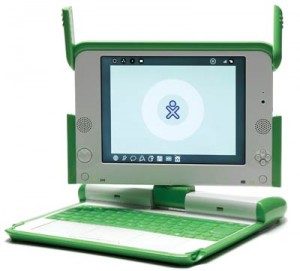 I definitely feel that the OLPC XO-1 machine is underrated, with many people criticizing it or trying to offload them on eBay.  I am somewhat surprised that more has not been said about the positives of the OLPC, so to bring balance back to the Internet, I have been meaning to both describe why I like the machine so much. I also intend to describe through series of posts document the customizations I have done to bring it to the much more usable state, for my specific and decidedly non-child needs.

Let’s start today with the Top 8 Reasons I think the OLPC is a great general purpose netbook and e-book reader.

1. The OLPC has a beautiful, high resolution, sunlight-readable screen

I love the screen on the OLPC, and eagerly await the day that Mary Lou Jepson’s screen technology, invented for the OLPC, eventually reaches other netbooks and notebooks through her Pixel Qi commercial enterprise. Until that day, I am amazed that more has not been said about the OLPC’s fantastic screen.  At 1200×900, the screen is higher resolution than many netbooks out there even over a year later.  Plus, unlike the current trend in even high-end notebooks, the focus is on readability over accurate color reproduction.  This means the screen has almost no glare, and is completely readable even in complete sunlight.  In fact, I can drop the OLPC’s screen to a low-power black/white only mode that produces a display comparable in resolution to e-ink based displays like on the Kindle.  However, unlike the Kindle, I still have color support so my movie videos or comics still show off in full color.

Pixel Qi has announced that it is manufacturing screens for other netbooks, eReaders and tablets.  I for one can’t wait, but for now, the best screen for me is my onmy XO-1!

2. The OLPC is completely solid state and silent

I’m a big fan of silent computing, and this becomes even more important when reading in bed and not wanting to disturb the sleeping wife.  There are no moving parts in the OLPC, as everything is solid state, like the Dell Mini 9 that remains popular among its other siblings in the Dell Mini line for precisely that reason (among others).  There’s no spinning hard drive, but with a 16GB SD card in the slot I am completely able to cope with the extra space a hard drive would have provided, in favor of being able to avoid noisy fans spinning up and down.

3. I can surf the web with first class browsers

With a Linux variant running on the OLPC, it is actually fairly straightforward to install any number of browsers, including Chrome, Firefox, Midori, Opera or (my current favorite) Epiphany. With the exception of Flash-based videos, which are not important to me, everything renders quickly and beautifully, and looks just like on my PC.  The very wide 1200 pixel screen also means less horizontal scrolling than I would need on even most “real” netbooks today.

4. I can view nearly any file format, including PDFs, eReader books, comics and movies

Whether you stick with the Fedora-based installation that comes with your OLPC, or another Linux variant, there are readily available programs for reading PDFs, eBooks of various formats (my favorite being .pdb files from Fictionwise), and even comic books and full screen movie files. My friends are usually surprised when I show them movies that I had ripped from DVDs playing back smoothly and without stutter using mplayer!

5. The unit and replacement parts are cheap

At $400, the XO-1 was pretty expensive in netbook terms, but nowadays you can get used OLPC units fairly readily on eBay for much less.  Even better, replacement parts and extra batteries are available from online vendors like www.ilovemyxo.com and www.xoplosion.com.

6. The screen rotates into a tablet-like mode for eBook reader

How many netbooks can do this?  The OLPC XO-1 allows you to swivel the screen around as you would on tablet PC systems.  With your PDF reader in full screen mode, you can then hold the unit like a book and page through with the d-pad beside the screen.  Or you can hold it like a slate on the airplane and watch a video!

7.  The entire unit is rugged and baby-proof

The OLPC XO-1 was built to survive harsh environmental conditions AND be child-proof.  It’s far more rugged than some other sub-$400 netbooks.  My toddler has drooled on keyboard and screen multiple times, with no ill effect.

8. The keyboard is usable and silent

There are other features of the OLPC even beyond those above that I could have mentioned, but didn’t make the cut.  I love the way the three USB ports are there, but can be protected by the “ears” to keep dirt out.  I love having the dedicated screen rotation button on the front. I appreciate having the headphone jacks, video camera, and microphone, although I don’t take advantage of those features in the way I use the OLPC.

But I’m getting side-tracked, and I think my point is made.  I wanted to spread some OLPC love to counterbalance some of the skepticism.  Even today, this nearly two year old piece of technology continues to amaze me with the design and thought that went into it, and the sheer utility that has far exceeded my expectations.

With the right customizations, the OLPC can be a fine computing device for adults.  Don’t ignore it as a possibility for your needs!  Maybe it’ll work for you, too?